Today we heard the news of the passing of Brian Dennehy, age 81.  For as long as I’ve known the term “character actor” Dennehy was always the first name that came to mind – it’s no wonder, since he has a staggering 184 listings in his acting filmography on IMDB. Since 1977 he’s been acting in film and TV, with many of his early roles in long forgotten TV movies. Yet, he put his time in and eventually landed larger roles in cinematic films and recurring roles on TV series. Though he was never nominated for an Oscar, he won a Golden Globe, two Tonys, and received six Primetime Emmy Awards (he even had a Grammy nomination for a spoken word recording).

His first significant role was in 1981 in a 5-episode character arc on Dynasty. In that same year, probably the first thing I ever saw him in was an episode of Darkroom (a long-lost show that I liked as a kid). Most people know him from his breakthrough role as Sherriff Will Teasle in First Blood (1982). Probably due to this film and other roles where he played a heavy/villain, he was thought of as a dramatic actor, but he did comedic roles too, such as in the 1995 cult classic Tommy Boy.  He had a starring role in the 1987 independent film The Belly Of An Architect, for which he gained critical praise – it was probably the closest  he came to the elusive Oscar nom. I admired Dennehy for his work ethic and pursuing his acting career after getting a late start (his first career was as a stockbroker) and staying with it until it could pay the bills. Here are a few memorable roles of his: 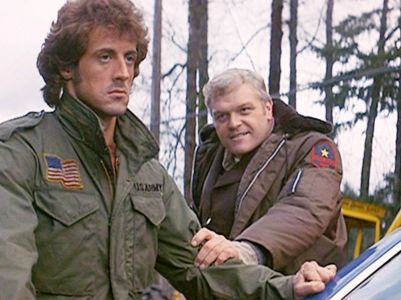 DJ: Dennehy was great in First Blood, he wa always a solid character actor that did his job well. I also remember him as Cobb in Silverado an underrated Western. I recently watched him in James Spader’s NBC TV show, The Black List as an old Russian spy. At first I didn’t realize it was him hidden under a deep Russian accent but he was great until the end.

Twilight Zone – The Four of Us Are Dying

Replacements – Message to the Boys

The Business of Being Marilyn Monroe

Hollywood Women of a Certain Age

Memo to Bureaucrats: Change the Rules to Enrich Yourself